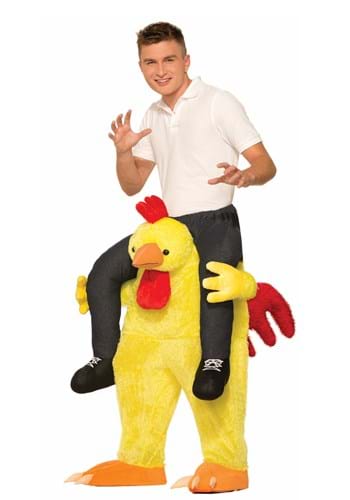 Conventional wisdom says don't bring a knife to a gun fight. A similar, but less known adage, is don't bring a turkey to a chicken fight. You do know what we're talking about, right?

"Chicken fights" are pretty well known in backyards and in pools where opponents climb on top of a partner's shoulders to take on opponent and try to knock them to the ground or splash them in the pool. (And no, we are most certainly not talking about illicit actual chicken fighting. That is most definitely, certainly not cool.)

So it might seem a little farcical, but now you know what we're talking about. And for your next battle, you won't even need a friend. And you're definitely not going to be a turkey. Because you're going to show up in this Chicken Fight plush ride-on costume!

This hilarious costume give you the appearance of riding on the shoulders of a big ol' chicken, but you simply wear it around your waist so you don't have to wrangle a real critter to ride on. Plush soft sculpted details gives the mascot a cartoonish appearance, and a simple elastic waist makes it an easy, go-to costume. Rock this costume for Halloween or for your next backyard party, and we're sure you're going to be an instant celebrity. And definitely not a turkey!