Plus Size Referee Costume for Women 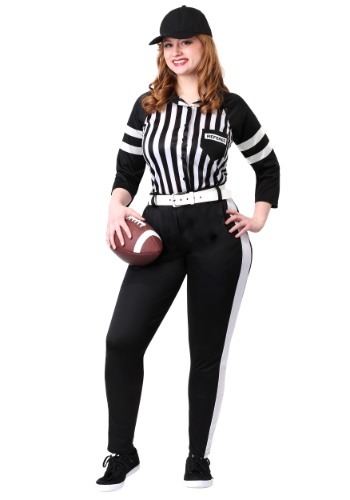 NOTHING GETS PAST YOU

Typically, the phrase "nothing gets past you," is something we'd say about a goalie, but you're just as perceptive so...congrats! It's also a phrase we'd holler when playing bar-trivia and our friend says the right answer in the nick of time to win first prize. "Nothing gets past you, bud," we'd exclaim. It's also something we'd say to an amazing referee. A ref who always makes a fair call. A ref who always gets there in time. A ref people admire, respect and even cheer for. A ref like you.

Remind people that being an amazing referee is just as prestigious as being a big-league baller and it won't be very difficult to do. Making the home plate call or repeatedly reviewing the catch at the 10-yard line won't be necessary either. To get rightfully-earned respect from fans and athletes alike, just wear the women's plus size referee. Fellow costume-clad bar-goers will probably greet you with applause, cheers and smiles. They've seen the calls you've made on the green and we bet there's a drink with your name on it waiting for you, the best ref around.

Obsessed with making a fashionable and classy referee costume, our team of talented designers worked hard to create the stylish, women's plus size referee costume. A quality Made by Us design, the black pants with side-stripe fasten around the waist with a button and zipper, while a white belt weaves through the loops. The striped long sleeve with "referee" patch pocket has a collar and real buttons, while the included baseball-style cap completes the look.

There are lots of women's ref costumes out there, but none are quite as polished as this one. Put the finishing touches on it by pairing it with black sneakers and red lips.