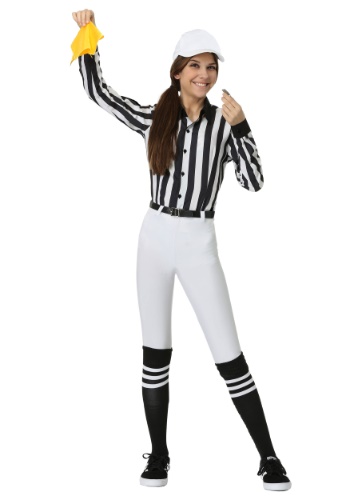 Get in the Game

We're about to blow the whistle!

It's time to call out all the unfair shenanigans that take place on the field, and we're not talking about the bias of one team over the other. The issue we're focused on has absolutely nothing to do with any of the teammates involved, but it has everything to do with the one person who's making all the important calls. This Halloween, we're standing up and cheering for the ref!

Referees don't have it easy. They have to see every catch, throw, and play that's made on the field, then make a just call based on their observations. Basically, they need a set of eyes in the back of their head in order to properly do their job, but they're only equipped with some flags and a whistle. Whether they make the right call or the wrong one, their declaration will be met with jeers and hisses from either one group of fans or the either. No one's ever happy, but yet, refs persevere.

If you want to dress as the real MVP of any sporting event then don a striped shirt instead of a jersey. Forgo suiting up in cumbersome pads and heavy cleats and wear this women's referee costume instead. You'll be the most influential person in any sporting arena once you're clad in the button up shirt, stretchy pants, and coordinating belt. An included baseball style cap and yellow flag serve as the finishing touches that distinguish you as the one on the field who calls all the shots!

Are you ready to hit the field and make sure that each team obeys the rules? Even if you're just heading out to the Halloween party this year, we think your referee skills will be much needed!