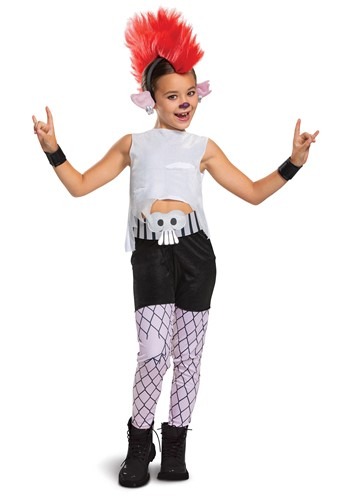 Before Barb saw the light, she was convinced that Hard Rock was the only way to unite the Trolls. All she needed was the six different strings of music from the different Troll tribes, and she could make a guitar that would rule them all. Yep, this young Queen was looking to make the whole nation her own! It takes a victory, and the failure of it, to show Barb that all music is valuable, and that the Trolls are better together when they are different, not the same. Do you have a little Troll lover at home? Let your child stand out from the crowd in this Trolls World Tour Girl's Deluxe Barb Costume!

Barb dresses just like her music: gritty, metal, and daring. This costume is made up of five pieces to really capture every detail of Barb's grunge style. The ragged crop top shirt is its own piece, while the shorts and the "ripped fishnet" pants come together as a separate piece. The belt features a stylized skull (because Hard Rock, man!), and is made of foam. The black wrist cuffs are perfect for the "rock on" hand sign. Don't forget Barb's signature mohawk! The bright red hair is attached to a headband, which also includes the Troll's tattered and pierced ears. Grab some combat boots, and your child is ready to rock!

Whether it's an air guitar, a toy one, or the real deal, your little Barb will be jamming all night long in this Hard Rock heavy look. Forget about the Ultimate Power Chord and Zombie Trolls—the true beauty of music (and of all of us) lies in our differences. So whether your child loves Hard Rock or is more into Pop, the magic of music is open to them. Let's rock out!