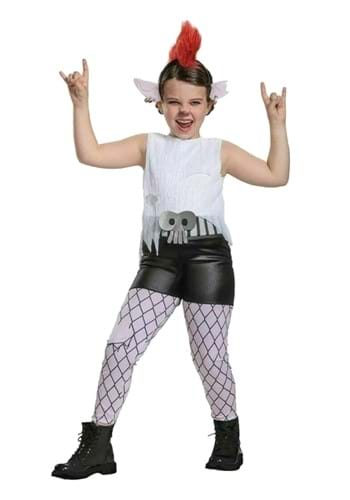 Ugh, pop music. It's so boring. So lame! Who wants to listen to "Can't Stop the Feeling" over and over when you could be listening to hard rock? Lately, you've been thinking about how great it would be to unite all the Trolls under your Rock rule. Right now, you are supreme in your lava-filled kingdom, but what if you could sell out rock concerts in all the Trolls countries? Other people might question your determination to get rid of all other types of music, but you know that it's the only way to bring all the Trolls together. Time to plan some musical world domination!

Rock and roll all night and party every day in this officially licensed Disguise Trolls World Tour Barb Costume for Children! When you're in a hurry to get out on stage and sing at the top of your lungs, you don't want to worry about a fussy outfit: This one-piece jumpsuit zips up the back so that you can get into it quickly. It's designed to look like Barb's complete performing getup, with a white tank top with a crinkly ripped overlay, a wide silver-striped belt with a stylized skull "buckle," faux leather shorts, and white leggings printed with distressed fishnet detail. The matching headband has a red faux fur mohock and Troll ears complete with silver earrings.

Okay, so you tried turning everyone into rock zombies and it didn't go over very well (who would have thought?) But you did learn a pretty important lesson along the way, and that is that differences can be really fun. Plus, you made some new friends. Rock might not have taken over the world, but overall, you like this outcome way better.