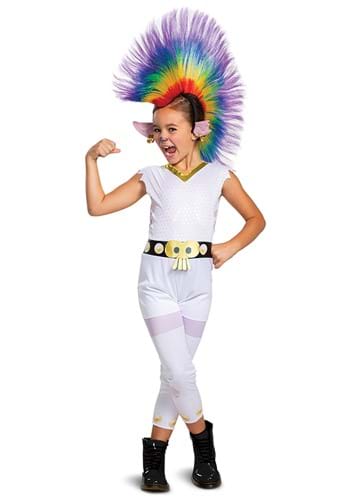 Queen Barb rocks, there is no doubt about that. But what rocks more than Queen Barb? Queen Barb rocks more when she rocks this rockin’ rainbow mohawk! The only thing that rocks more than the look itself is the feeling that you will have as you get to represent your favorite character in awesome style. There can be no doubt that the queen of the rock tribe brings the power and the style and so will you when you don this costume and show up ready to rock and rainbow.

Barb knows when to rock and when to roll, and she has all the attributes to get it done. She’s strong, capable, and a little rash, but has a kind heart and cares for others. Being her won’t be easy, but we know you’ve got it in you!

This costume rocks the belt and ears of a true troll. When you wear it, you will feel like Barb during any one of her great performances. The rainbow hair only adds to that signature look.

On the front stage, no one can be better than Queen Barb. She is quick and strong, fast and confident. She can jump, slide, and throw better than anyone. She is intelligent and never hesitates to think on her feet. She can make a good plan and has the leadership skills to bring her tribe in on it. You’ve made a great choice by picking Queen Barb, particularly so with the rainbow hair… In fact, we’d say you’re sure to have the most colorful costume at your next party!