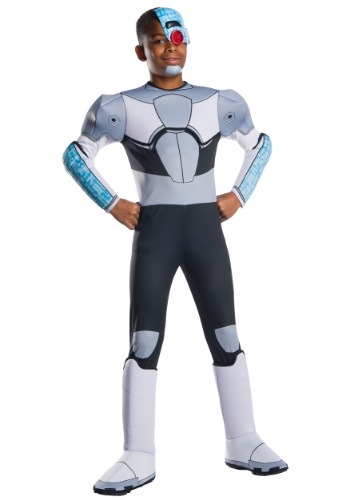 Every team needs a tech guy. We have one. His name is Dave. He can fix just about any computer, no matter how messed up it is. We even saw him fix our internet once by resetting the internet. He’s our hero!

Well, the Teen Titans have a tech guy too. His name is Cyborg and he can totally fix any kind of computer problem, but can do a LOT more with his skills in technology. Cyborg has super strength due to his cybernetic enhancements. He also has superhuman speed, stamina, and a pair of sweet rocket boots in his feet. He can shoot sonic waves from his hands and he can even access the entire internet in the blink of an eye to figure something out. Not to knock on out IT guy, but Cyborg seems like a better guy to have as your IT guy.

Does your child like tech? Does he want to be a superhero? Then it’s time for you to dress him up in this Teen Titans Cyborg costume! This officially licensed costume recreates Cyborg’s look from the animated series. It comes with a full-body jumpsuit. The top half has printed details, including printed armor and blue “cybernetic” details on the arms. It also has foam armor pieces that fit over the shoulders. The bottom portion is black, but has gray boot covers attached to the feet, which can be worn with any pair of your child’s favorite shoes. Of course, the final piece to this costume is the vacuform mask, which is shaped like the rounded blue portion of Cyborg’s head in the cartoon.

Your child will be the genius tech guy superhero when he wears this Cyborg costume! Gather up a few of his friends to dress up like Robin, Raven, Beast Boy, and Starfire to reunite the entire Teen Titans team.