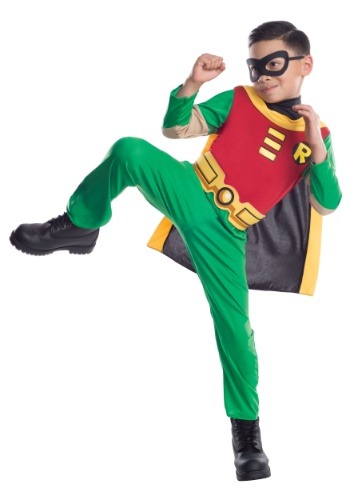 At first thought, you might think that regular teens and superhero teens really don’t have much in common. Most normal teenage kids spend their days dealing with homework, making it to class on time and trying to figure out what to say to their crush. Robin? He’s a superhero kid that spends his days fighting crime, trading blows with Slade, unraveling Brother Blood’s latest scheme and trying to figure out what to say to his crush, Starfire. Hey, all teens share some things in common, even teens that also happen to be superheroes! Now, your child can share something else in common: the superhero outfit.

With this licensed Teen Titans Robin costume, your kid can join the ranks of superhero teens, who never have to worry about homework. Instead, your kid will be battling it out with Slade! The costume comes with a bright red top and green bottoms which combine to recreate Robin’s costume from the iconic cartoon series. Robin’s “R” symbol appears on the chest of the costume. It also has plenty of yellow accents for a heroic style that would make Batman proud. Of course, it comes with a black and yellow cape like the one he wears in the cartoon for a complete look.

Once your child has all the pieces on, he’ll look ready to command his own team of Teen Titans. Whether he’s giving orders to Beast Boy, Raven, Cyborg and Starfire, or he’s just leading his group of friends on the next mission, he’ll certainly look the part.