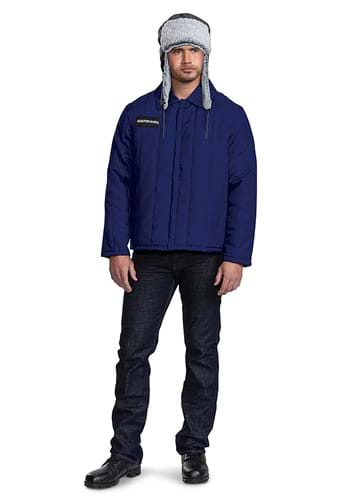 Do you prefer warm or cool weather? Although many of us have climate control inside our houses, we haven’t quite worked out the details on how to influence the atmosphere outside. If that were possible, we’re pretty sure that Jim Hopper would have taken advantage of it! While stuck in Siberia, poor Hop had to endure plenty of freezing weather, among other troubles. At least he had a rather cozy-looking jacket and hat to help protect him from the cold—although it wasn’t quite as effective against Russian soldiers. If you want to dress like this courageous character, then this outfit is exactly what you need.

No matter the climate you live in, you can imitate Jim’s look from Season Four of the popular Netflix show with this Deluxe Hopper Costume! Fortunately, you can wear your own comfy pants instead of the scratchy prison-issued pair that Hop had to endure. The blue jacket is made of slightly puffed fabric and has a folded-over collar at the neckline. Decorative buttons down the front and a patch on the right shoulder add authentic detail to the top. The gray hat has fluffy flaps that cover both ears and complete the look. Add your favorite pair of shoes or boots and you’ll be ready for snowy Siberia!

Caught in the Cold

Don’t get caught in the cold! Bring home this Deluxe Hopper Costume so you can dress like your favorite Stranger Things character and stay warm at the same time. You can also fill out the rest of the cast from Season Four with our other Stranger Things costumes! You’ll have amazing adventures with Eleven, Lucas, Steve, and the rest of the gang. Whether you need to defeat interdimensional monsters or just want a fun night of trick-or-treating, we have all the right costumes for you and your group!