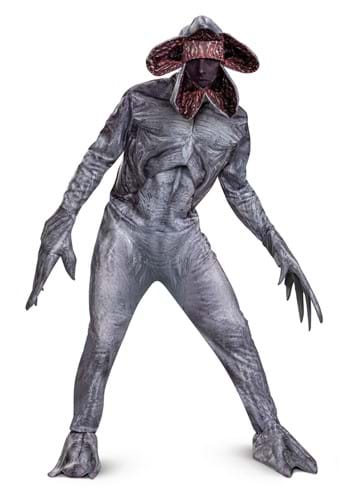 It's been a long time! Do you remember watching that first season of Stranger Things? The Demogorgon seemed like the most terrifying thing that could ever happen to the Hawkins crew. Boy, were we wrong! After many more seasons, packs of Demodogs, a psychotic brother being mind-controlled, and Vecna himself? When you think about it like that, the Demogorgon sort of feels like a familiar old friend to the folks of Hawkins.

Now, you can bring that "friendly" fiend to your hometown when you wear this Stranger Things Demogorgon Costume for adults. It's officially licensed from the Netflix series and it will help you bring a touch of the Upside Down to your neighborhood.

Ready to embrace your inner Upside Down monster? Just slip into this Stranger Things costume! The outfit comes with a simple gray jumpsuit that has printed details on the exterior to make it look like the monster's skin. The top has an foam padding in the chest shaped like the Demogorgon's otherworldly muscles, and the gloves recreate the long, claw-like fingers of the creature.

The shoe covers are designed to fit over most pairs of shoes, so you can wear your favorite shoes with this outfit. Finally, the finishing touch to this costume comes in the form of a detailed character hood. The hood is shaped like the Demogorgon's face! There's a mesh-covered opening in the middle for your face, so you'll (sort of) be able to see your prey as you stalk the normal world!