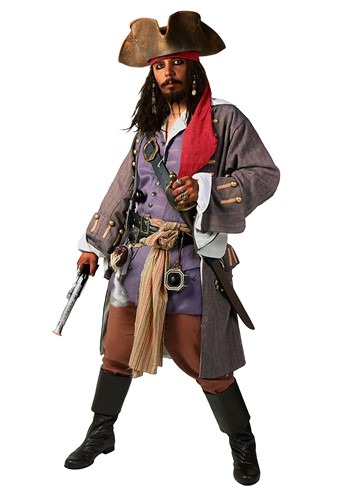 The best pirates make it look so easy! But it's a lot tougher than it looks. It takes more than just a taste for rum and a funny accent to be a pirate. It takes charisma. It takes skill! It takes a dashing outfit. And a taste for rum!

Wait a second. Did we already mention the rule? Well, we can't really help you out with on the charisma or rum end of things. We're fresh out of both of those things. We can, however, help you with a dashing swashbuckler outfit that will have you ready to set sail to the golden of pirates—the Caribbean in the 1700s. This Made by Us Caribbean Pirate Costume comes with everything you'll need to get your swashbuckling adventure started the right way... except the rum, of course! Did we mention the rum? Anyways, from head to toe, you might look a little TOO much like a pirate.

This costume is the true king of all pirate costumes. Just like a real pirate outfit from the time, this costume comes with multiple pieces, including a shirt, jacket, pair of pants, sashes, and belts. The shirt is a simple, loose-fitting cotton-poly blend shirt with cord ties at the neck. The pants have a cropped style with a button fly front with a drop panel. It even has functional pockets that would be the envy of any pirate on the high seas. The jacket has ornate, gold-colored buttons in front and functional pockets with flaps in front. The costume also comes with faux leather belts and a scabbard slot, which you can use to hold a toy sword.

Put it all together and you're ready to become the captain. Make sure to pair it up with our matching hat and bandana accessories (sold separately) to complete the look. Then, the only thing you'll be missing is some of that rum!