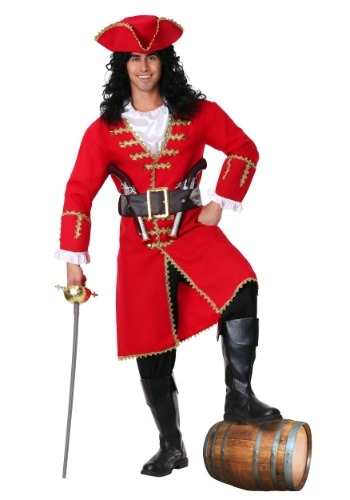 If you want to be a pirate, it helps to be a well dressed pirate. Actually, that rule applies to most professions, but especially when it comes to pirates. When you're decked out in our exclusive Captain Blackheart Costume, you'll be the most dashing privateer on the high seas!

A diabolical pirate captain, with a whole crew of salty sea dogs following their orders, and commanding a sinister looking ship that's bristling with cannons and billowing sails as black as the cold ocean deep, can be a formidable force to reckon with. But if that captain doesn't have a flashy costume to back it up, the other pirates might not take them seriously. Ol' Captain Blackheart doesn't have to worry about that, though, since he always wears his fanciest outfit when he goes plundering, and his crew will follow him to the ends of the Earth in search of treasure because of it! Well... it's probably his costume, or it could be the fact that Captain B. always sails with plenty of fine rum in the cargo hold, which can be good incentive to stay a loyal member of his crew. But, it's probably mostly the costume!

When you're dressed in this crimson red overcoat and daring tricorn hat, you'll definitely look bold enough to command your own gang of swashbucklers. Nobody will question your authority, especially if you have a toy sword and a flintlock pistol (or two) tucked in the faux leather belt. Check out our matching blue Captain Blackheart cape and find a good pair of cuffed boots to complete this dashing look! And it never hurts to bring a couple bottles o' rum to bribe- errr... to inspire courage in your crew.