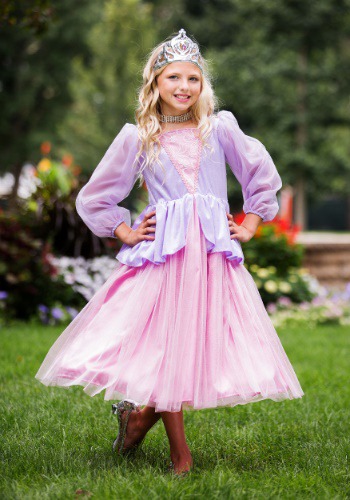 Princess Costumes for your Princess

Once upon a time, there was a little princess who lived in a mid-century modern home with her mother and father, the king and queen. Now, this was a different kind of kingdom called a suburb. The great kingdoms of the world had long ago been turned over, instead, everyone got to rule over their own small plot of land, it was actually pretty sweet. This modern-day princess may have lived long after monarchies were the norm but that didn't stop her from rocking a tiara.

The little girl was a princess no matter what she was wearing. When she came home from dance class she looked like a princess in sweatpants and a high bun. She showed her high-born heritage when she cheered her nervous friend on during swim class. The king and queen could pick up on her noble aura when she swung on the tire swing at her grandparents' house or tenderly held a butterfly, even if she was wearing jeans and an old t-shirt.

Then, one day the kingdoms of the neighborhood all got together to celebrate Halloween, The King and Queen searched far and wide for a princes' dress that would suit their free-spirited, good-natured princess. They asked their jester, a passing white knight, they even asked a passing Butler, Jeeves. Finally, they asked an oracle machine they called the internet.

The oracle told them about this gorgeous yet free-flowing dress. The dress had a built-in hoop for the ultimate fairytale look, a top with flowy sleeves, and it came with a soft and comfortable tiara. The day came and the package arrived, the princess was delighted with the full skirt that was so perfect for twirling in. She twirled and twirled, happily posing for Instagram snaps and everyone had a happy Halloween ever after!