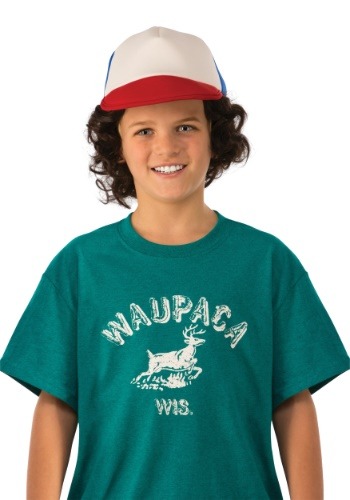 A Star is Born

Let's face it: everyone dresses like Eleven for Halloween. Yeah, it's a cool look. And we love El as much as the next person. But there's more than one way to be a star on Stranger Things. Being a cool telekinetic kid with crazy powers and a cool look is only of them. Being Dustin is another!

Because who doesn't love Dustin? Seriously, raise your hands...we'll kick you off this site right now! Dustin is the coolest kid on the show. Comic relief? Dustin offers it! Good ideas? Well, at least he keeps the plot line moving. Classic boy-girl drama? Dustin comes to the rescue there, as well. And a hard-to-define, endearing big brother-ish relationship with Steve Harrington? Dustin's on the other end of that, as well. Basically, without Dustin, we'd be watching Eleven knock over convenient shops and go full-blown punk on us while Mike freaked out back home. Dustin grounds the show in the pre-teen awkwardness and earnestness it needs. So slip your child into this Stranger Things Dustin Waupaca Shirt and let them live out Halloween night as their favorite kid in Hawkins, Dustin!

This is licensed replica for the green graphic tee Dustin sports in Season 2. Printed with a retro "Waupaca, Wis." logo and a leaping stag, this shirt pairs well with Dustin's signature hat, (not to mention, his sass). We haven't been to Waupaca, but we hope they're ready to claim that the show's biggest star repped their town!

Sure, the show is an ensemble of stellar performances and cool plot twists, but Dustin is a standout and everyone knows it! Let those other fans wear their pink dresses and eat their frozen waffles—your kid is giving props to the underdog, the little guy with the big heart (and hair) that keeps your favorite show loveable!