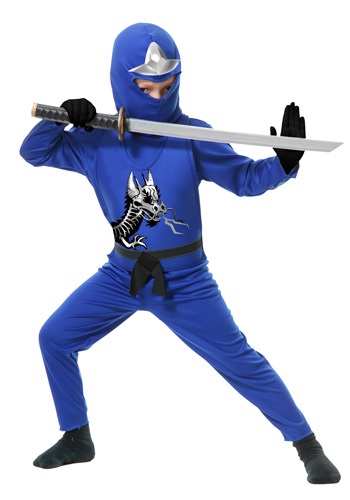 What is the most fearsome type of warrior throughout history? If you guessed Legionnaire, or the Mongolian Horseback Archer, or even a traditional Samurai then...you’d be wrong. The most fearsome warriors don’t just show up to conquer you, they wait until you’re at your most vulnerable state and then surprise you when you are least expecting it.

So when your child asks which warrior she can be for Halloween, you can tell her all about the ninja, and get her this outfit. This Child Ninja Avengers Series II Blue Costume is the perfect outfit for a quiet conquest...or a subtle victory. She will be so excited to be able to blend into the night in pursuit of her mission, moving from shadow to shadow and stalking her next target. Even the neighborhood cats and dogs won’t be able to detect her presence when she vaults in and out of her hideout with perfect grace and stealth. Fully covered from head to foot, she’ll leave no evidence behind of her ever having been trespassing through enemy territory.

Fun fact: ninja outfits traditionally came in blue, because they blended better into the dark of night than black did. And while this color blue won’t necessarily make your little one invisible, it’s still more true to history. And while most ninjas probably didn’t have a black and silver dragon printed on a polyfoam blue vest, we still think it looks pretty fearsome. To complete the look, make sure to pick up a few ninjas accessories for her--though you may need to watch your back every once in a while when you deny her that extra cookie after dinner.