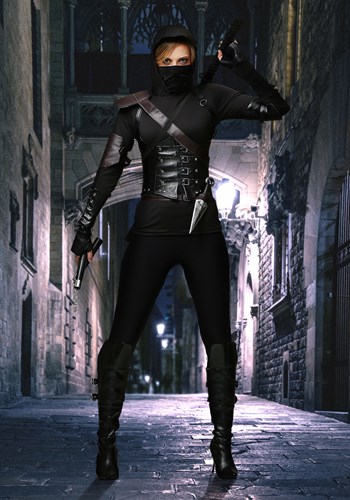 If you're anything like we are, you think ninjas are pretty cool. After all, who isn't interested by the infamous mercenaries of feudal Japan?

Tell us, what first attracted you to the secretive ninja? Was it the constant conflict simmering underneath the surface between them and Japan's elite samuri, who considered the ninja's deceptive tactics to be dishonorable? Or perhaps you stumbled onto ninjas during your keen study of the Sengoku period, when mercenaries and spies for hire became active in Iga Province. Maybe ninjas were just a footnote of your initial quest to better understand the Tokugawa shogunate in the 17th century, but you were struck by the tragedy of their slow fade into obscurity and decided to more thoroughly study these secret warriors. Maybe you were casually reading through Fujibayashi Yasutake's classic military treatise, the Bansenshukai, really intending to study his examination of philosophical beliefs of Japanese clans, but the information about the ninja was too interesting to skim past.

Whatever first attracted you to the ninja, we have a totally-historically-accurate-and-culturally-aware costume that's fitting for its noble heritage. This exclusive Women's Plus Size Ninja Assassin Costume is made with a mix of polyester and spandex fabric and features a long-sleeve pullover shir that has an attached hood. There’s also a cowl collar that can be pulled up to serve as a face mask. There’s a faux leather corset with metal buckles in the front, ribbon lacing in the back, and a hook-and-loop halter strap around the neck, while there’s also distressed faux suede trim on the costume’s sleeves and hood edge. The costume also comes with a brown faux leather belt and arm cuffs that fasten with metal buckles, along with a brown faux leather shoulder harness that fastens with a hook-and-loop closure. (The leggings, boots and toy weapons are sold separately.)

Melt into the shadows

With this Women's Plus Size Ninja Assassin Costume, you'll be ready to join your fellow ninjas to defend Japan from any threat... or just enjoy your next costume party!