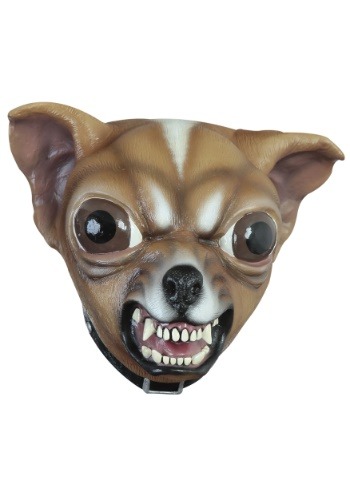 PUPPERS OF MANY MOODS

There are certain breeds of dogs that must live with various unfair stereotypes. The lovable Pitty faces scrutiny due to its powerful jaw and the assumption that he might not actually be a good boy. Meanwhile, the Labrador too often gets called a lunkhead just because it plays awkwardly with all those golden locks.

But, it is the small dogs that have it the worst! Ankle-biters cursed with small dog syndrome and the need to jump and growl and seem larger than they are? Well, the movement has begun. Time to show the naysayers what is what!

With this ferocious-looking Chihuahua Mask, you can turn the tables on those who would dare offend the sweet little pups. They think they are going to chastise the little guys? Well, what will they think when this mask lets you become a bipedal, adult-sized ball of terror! This latex mask will make all those stereotypes seem true with just one bark!

This snarling Chihuahua mask looks just as scary as some little dogs wish they were. But, that means you'll want to be careful when barking at other real dogs. You'll have them hiding under the couches in a snap!