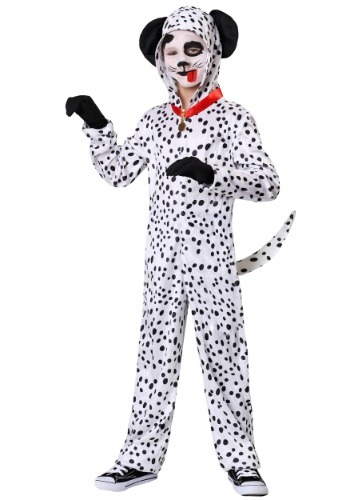 A lot of times, spots are seen in a bad light. Think about it. One red spot on the arm could mean a whole slew of conditions. Maybe you have Chickenpox or a rash? Lots of oatmeal baths are ahead, my friend! If you're on a jungle safari and see a spotted animal through the brush, better run. It's most likely a leopard and if we had to guess, they're hungry. Ladybugs are another spotted creature and those aren't so bad, we suppose. A ladybug landing on you allegedly indicates good luck but we never found this to be true. So far ladybugs are just basic bugs and we aren't impressed with them— at all — but do you know what spotted animal we do happen to be impressed with? Dalmatians. Dalmatians are awesome and one day we'll own more than Roger and Perdita (the couple in the popular cartoon movie). For now, we'll disguise ourselves as one by wearing the delightful Dalmatian costume.

Perfect for kids obsessed with the spotted canine, the cozy jumpsuit is the best way to imitate the official firehouse dog. Trust us, we've tried just about every other way. It was time-consuming and messy painting black dots all over our bodies, plus we were chilly. Take it from us, you'll have a tail-wagging good time wearing this costume.

The exclusive Dalmatian costume for boys and girls is a Made By Us costume that's designed to ensure a fun Halloween adventure. The spotted jumpsuit, with attached hood and rounded puppy ears, also has a tail fastened to the back to get the complete 'Fido' look. Finally, an included red collar serves as the only pop of color on the otherwise all black and white costume.

NO BONES ABOUT IT

Did someone say, 'treat?' It's the perfect dog costume for collecting what dogs and kids love best; Treats!