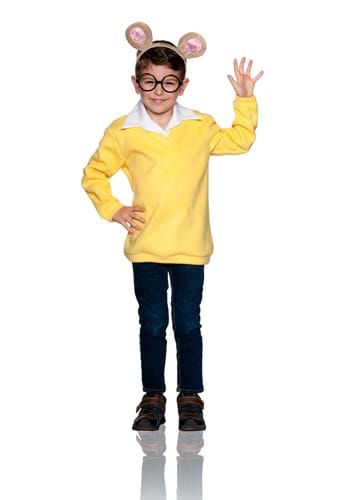 Oh, Are You Having Cake?

Arthur woke to the sound of a loud scuffling downstairs. It was dark out and he knew that DW and his parents should be in bed, and Pal was in his usual place too. What could it be? Even though he was scared, Arthur got out of bed and began to sneak downstairs. He jumped slightly when DW’s door opened and she came out, apparently ready to investigate as well.

Going down the stairs together, they tried to move slowly and silently in order to see what was making that horrible sound. It was coming from the kitchen. They rounded the corner of the banister and headed toward the kitchen door. Giving each other one last look of mutual terror, they courageously bounded into the kitchen, screaming as they went! What they saw was the last thing they had expected: the startled and embarrassed face of Mr. Ratburn covered in frosting and bits of cake. “Oh,” he said, “are you having cake too, Arthur?”

If you ever have a huge rat for a teacher, just make sure you hide the cake better than Arthur’s family did! Being an aardvark also helps, which is where this Boy’s Arthur Kids Costume comes in. The larger yellow sweater with a sown-on white collar are a perfect match for the loveable PBS star himself. Whether you are going to class with Brain, hanging out with Buster, or staying home with Pal, this costume never fails to impress.

If your child wants to dress up as the titular character of the show Arthur on PBS, then this aardvark costume is the one for you. Your child will be happy to feel like they are the cool and fun Arthur, no matter what crazy adventure they have planned for the day!