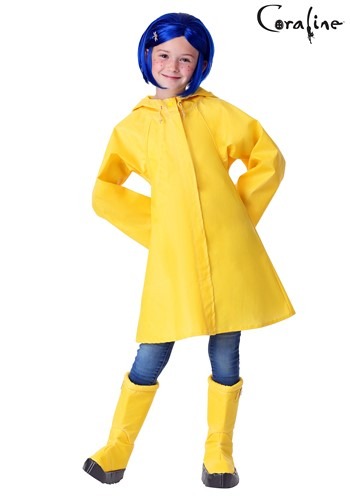 THINGS AREN'T ALWAYS WHAT THEY APPEAR TO BE

At first glance, the Other World seems pretty chill. You enter it by going through this neat, little wooden door, then you're greeted by two attentive and entertaining parents. Other Mom and Other Dad have buttons for eyes, which is kind of alarming and unusual, but they seem cool! They make dinner, tell jokes, play music and overall seem like awesome people—but, things aren't always what they appear to be. The Other Mother has another side to her that's not so pretty; actually, it's downright monstrous. She steals children, takes their eyeballs, replaces them with buttons and feels no remorse. Oh and we forgot to mention, she turns into a giant spider whenever she's really mad. It's terrifying. (But not as terrifying as having your eyes plucked out. Yikes!)

So, before crawling into a tiny, mysterious door in search for the Other World, be happy with this one because, in this world, we have the officially licensed Coraline costume for girls. Transform into the bold, blue-haired, stop-motion character with this convenient costume and we promise, replacing your eyes with buttons isn't an option. (You're welcome.)

The exclusive girl's Coraline costume is a Made By Us design so it's high-quality and expertly designed by our costume team to recreate the character outfit seen in the movie. The hooded yellow raincoat features a front zipper and flares out at the hemline, creating a cartoonish look. Coraline's bright blue hair makes her instantly recognizable while a pair of slip-on rainboot boot covers are included to complement the raincoat.

DANCING IN THE RAIN OR SUNSHINE

You're almost ready to venture out into the world (just not Other World) but your costume isn't complete without Coraline's curious attitude and courageous spirit. Have plenty of fun taking snapshots featuring Coraline exploring with a flashlight or crouching at a tiny door. If you have a utilities access door, this pose is Instagram gold! With great costumes like this, no one can keep Halloween excitement buttoned up!