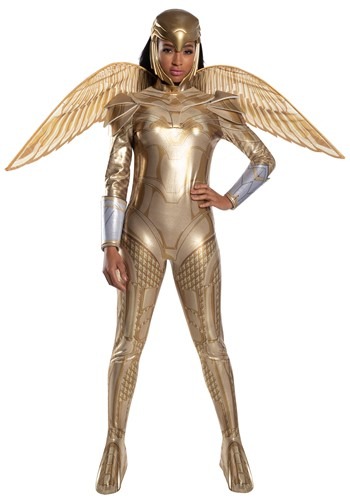 So, you want to dress like a superhero for your next costume party? Might we suggest Diana Prince, AKA Wonder Woman? Diana is pretty much the most impressive heroine around! She's got a Lasso of Truth, an Invisible Jet, and a really cool, iconic costume. Pretty much everyone can describe her star-spangled bottoms, red top and gold W embellishment on the front. Talk about good branding!

But... maybe the branding is too good. What if Wonder Woman is so popular, someone else dresses up like her at your costume party? This would never do! What's the point of dressing up like a fierce, heroic role model if you don't get all the attention for doing it? If you have to split the attention with Stacy from accounting, that's not even worth it.

Well, we have the solution! Why not dress up in one of Diana's other heroic outfits, like her spiffy golden armor? Surely no one else will be that creative!

Defend truth and justice in this Wonder Woman Gold Armor Deluxe Women's Costume. The officially licensed costume looks just like the golden armor Diana Prince wears in her new movie. The gold jumpsuit is made from 100 percent polyester, with printed armor graphics all across the costume. It has a zipper closer at the back, with attached armor, gauntlets and foot covers. There is also a molded plastic headpiece that befits the Princess of the Amazonians and helpfully includes an elastic band at the back to keep it in place. Of course, the most impressive part of this costume is the giant golden wings that attach to the back of the jumpsuit with hook-and-loop fasteners.

Doin' Good and Lookin' Even Better

Look like the fierce and fashionable Amazonian princess you are in this spectacular costume!