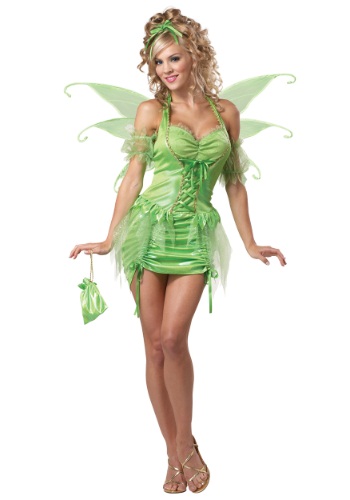 Laughter is timeless. Imagination has no age. Dreams are forever.

Remember what it was like to be a kid? Long days spent playing in the sun, imagining we were part of magical worlds….and what better magical world was there than Neverland? Think about it! It’s a magical world that exists within a star! And the whole place is full of adventures…pirates, natives, mountains and jungles and oceans…and the best part of all? It’s got fairies!

So while our friends might’ve been busy pretending to be Peter Pan or one of the Lost Boys, we were all about wanting to be Tinkerbell. Yeah, sure…she had some attitude, but wouldn’t you? Your best pal invites these naive British kids into your secret world, and then all he does is pay attention to that wet blanket Wendy! Oh sure, everyone thought Wendy was just oh so sweet, but was she ever any actual fun? She even tried to get Peter to go back to her world with her to talk to her parents about marrying her! HELLO, it’s called Neverland for a reason, sister!

Anyway, what we’re saying is: Even though everyone else thinks Wendy is so great, we’ve always known that Tinkerbell is the real heroine of the story of Peter Pan and Neverland. And with this Women’s Plus Size Tinkerbell Fairy Costume, you can easily show everyone what side of the North Star you fly on. whose side you stand on! The green halter dress made of interlock knit and glitter organza fabrics will make you look positively magical (and the metallic gold braid and green satin ribbon trim won't hurt, either). There's ribbon ties on the skirt to allow for length adjustment, and the wings have clear elastic shoulder straps for maximum comfort. The costume also comes with a headband and a fairy dust pouch! Fairy dust is not included, however...but we're pretty sure that, in this costume? You'll have no trouble making some wishes come true all on your own! *wink*