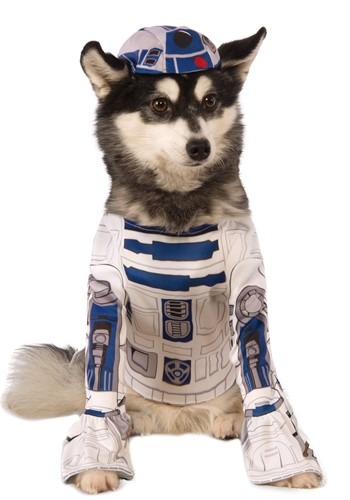 Ever wonder how Luke managed to understand all those blips, beeps, and whirrs coming out of everyone's favorite astromech? Sure, we get why Goldie the Lingobot (C-3P0) had no issue translating. Let's face it, interpreting languages was in his core programming due to that whole protocol droid thing. But, there's a good deal difference between being a droid that instinctively knows Binary and being a people who have to figure it out.

We'd never compare R2-D2 to a dog... Hold up. No, we'd definitely do that. Dogs are smart, loyal, tricky, and humanity's best friend. They rush to save us when we're in trouble and look friggen adorable while they're doing it. R2-D2 is definitely the Star Wars version of Luke (and Anakin's) best pooch. Now, suddenly, we understand!

Bring your pooch to a galaxy far, far away (or visa versa) when you let your four-legged friend become your best droid, too! This officially licensed R2-D2 pet costume closes along your pup's back and has an elastic band on the cap. Both components are printed to look like Star Wars' iconic astromech droid from the white base, blue panels, and camera eye.

Blip Once for Treats

You no doubt have your own secret language with your pupper, so you're practically acting out a Star Wars scene with R2-D2 already! Time to make it official with this pet costume. (Just don't expect your pup to start repairing your car!)