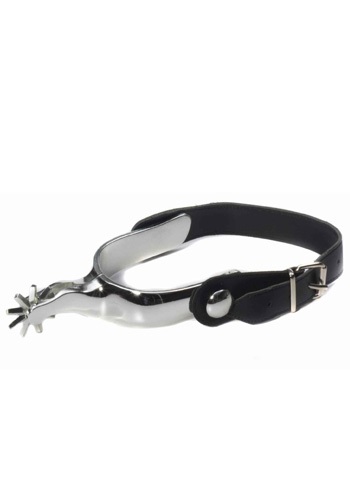 You know, everyone wants to be the new sheriff of this here town, but is anyone really willing to put in the work? They all want that moment of pushing open those saloon doors, staring everyone in the eye, and saying, “I’m the new sheriff in town” real low and menacing-like, but the second trouble happens, they’re nowhere to be found! Which is incredibly annoying, because then we have to buy a whole new sheriff’s outfit, and we don’t know if you’ve heard, but even in the Wild West, crime tends to keep the people away.

So we’re counting on you not to be like the rest, understand? And to prove it, we want you to take these Deluxe Cowboy Spurs. Yes, you heard correctly - you get a company horse along with the job, but you gotta know how to handle Lil' Doggie, and she don't take too kindly to any mealy-mouth soft-palmed Yank. If you wanna ride off into the sunset after them pair of bandits, you're gonna need to use these spurs. They also actually spin when you walk, which - we're not gonna lie - is kind of a kick. Get it? We said "kick" when talking about spurs! Never mind - no one ever said a Sheriff had to have a sense of humor. Just get out there and catch them robbers!