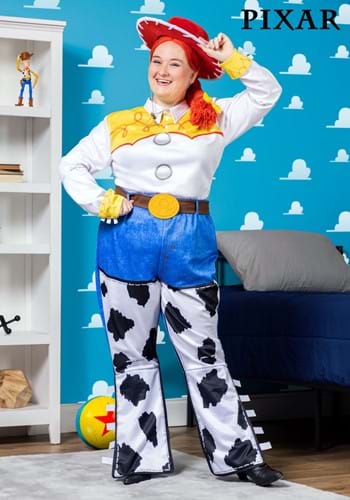 Disney and Pixar's Jessie is probably right. Andy and Emily have forgotten her. That's how the story's written, after all. But you find it hard to believe such a big personality could be wiped from anyone's memory. Part of that may have to do with meeting the spunky cowgirl after graduating from both daycare and grade school. A bigger part, however, is the character's uniqueness.

In your eyes, Jessie shines like a freshly polished sheriff's badge catching the sun. Her passion for adventurous play, even as a vintage, past-her-prime toy is admirable. You've made it a life goal to stay as spirited. Then there's her quirky language and talent for yodeling—it makes a lasting impression. Plainly put, to you Jessie is truly unforgettable!

Celebrate your favorite cowgirl's legacy with our Deluxe Disney and Pixar Jessie Plus Size costume! The Made By Us exclusive recreates Jessie's iconic cowgirl getup in two easy-to-wear pieces. Jersey knit fabric composes both the top and bottoms of the costume.

Sublimated print details give the simple garments the more detailed appearance of Jessie's blouse and pants. The attached "chaps" are made of felt material printed with cowhide spots and give the pants dynamic movement without any fuss. Meanwhile, a leatherette belt and lightweight Jessie cowgirl hat provide final polish to the officially licensed ensemble.