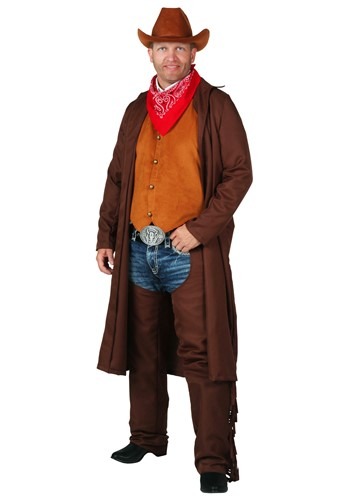 You gonna pull those pistols or whistle Dixie? - Josey Wales

Who are the baddest of the bad? Well, some might say that football players are pretty tough. But, they are just playing a game. Some people might say that super heroes are brave. And don’t get us wrong, they are...but they are also a little bit sillty in their spandex. And let's be honest, cowboys are pretty intense dudes.

They stood across from one another, took out six-guns, counted down, then shot each other. All while knowing that they didn’t have antibiotics, or anesthesia. They are the ultimate in not giving a crap. Often times they also have nothing to loose. And are all the more reckless, and unpredictable for it.

So, what are you going to do: put on this Adult Cowboy Costume, or whistle Dixie? You are going to put on the hat, the bandanna, and the long coat. You are the kind of brave that is sometimes mistaken for insane. And you are willing to stand up against any injustice that happens before your very eyes. You will stand in a duel. Hopefully you will be quicker than the other guy. What are we saying, of course you will. You made it this far after all. Probably while saying lines like, "You see, in this world there's two kinds of people: Those with loaded guns, and those who dig."