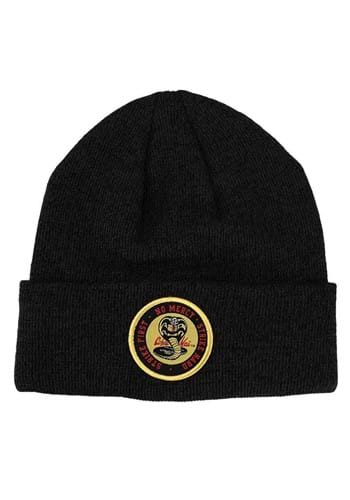 Walking the streets in your Cobra Kai gear is usually a way to show the rest of the karate kids that you are a tough, merciless foe. There is no way that you would let anyone disrespect your dojo, or talk about your Cobra Kai style disparagingly. That nonsense doesn’t have a place on the streets.

On the other hand, it is also a way to invite the Cobra Kai fans to come talk to you, get autographs, and meet the members of the most successful dojo of all time. You think it is really nice to meet some of the fans, especially the younger ones who will one day be the next big thing!

Whatever you are fighting for, it is through victory that you will achieve it. Make sure you have every advantage by wearing this Cobra Kai Woven Patch Beanie! The beanie itself is extremely comfortable. It is snug without being too tight. The patch on the fold over has the crest of the Cobra Kai dojo, along with the words “Strike First, No Mercy, Strike Hard”. This is the maxim that will show you the way to victory! You will look just like a member of the Cobra Kai in this beanie, just remember to watch out for kicks to the head!