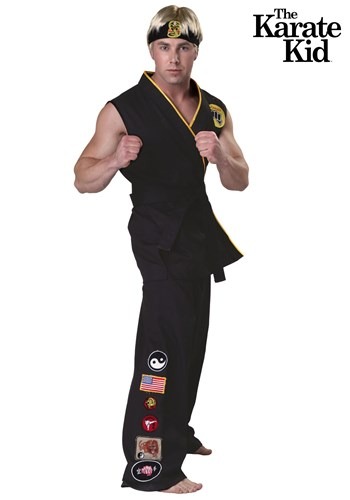 There are karate dojos out there that focus on personal improvement, achieving balance in the universe and respecting your fellow competitors. These dojos and their masters stress the importance of always fighting fairly, only fighting in self-defense and protecting those who can’t protect themselves. They look at karate as a journey toward constant self-improvement, as a way to quiet your mind and learn how to peacefully coexist with all living creatures.

Don’t get us wrong… That “peace and justice” stuff is nice, and all, but it doesn’t get you very far in the real world. It doesn’t create trained and focused fighting machines that will win no matter what. It doesn’t result in tournament champions.

That’s why, at Cobra Kai, we take a bit different approach: Teach our karate students how to cheat their way to victory. Whether that’s illegally kicking a competitor in the knee or unfairly taking advantage of your opponent’s injury, as long as you end up on top, then all’s fair and anyone who disagrees is just a crybaby loser.

With these principles in mind, we think it makes total sense that you want to dress up as someone from The Karate Kid’s Cobra Kai dojo. While we recognize the irony of an adult dressing up as a specifically “kid” character, we say you’re just using your strengths to your advantage. When you’re a head taller than anyone else in the competition, you should definitely come out on top!

Suit up for your next karate championship (and championship win, of course) with this Karate Kid Adult Plus Authentic Cobra Kai Costume. The official, exclusive costume includes a shirt, pants, belt and headband. The wrap-around shirt ties at the waist and features printed Cobra Kai patches on the front and back. The pants have an elastic waist for comfy fit and also feature patches on the leg. There is also a matching headband with an embroidered patch.

With this Cobra Kai costume, you’ll definitely be ready for your third win at the All Valley Karate Championships tournament… as long as no one surprises you with a crane kick.