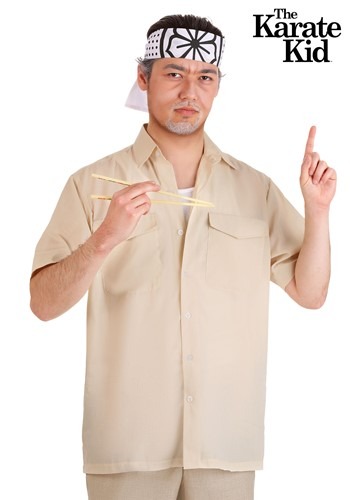 When you look at the Cobra Kai Dojo, its instructor, its students, and even their uniforms, it is pretty clear that karate can be really complex. All those patches, instructions, and the intensity of the sensei!? It is no wonder that these guys are the favorite to win at all the competitions. Meanwhile, on the other side of town, you have Mr. Miyagi. The guy doesn't even have any flashy titles or a nifty-sounding dojo name! How much depth can he have!?

Well, as we are sure you guessed, Miyagi has depth for days. Kreese likes to use his military history as proof that he's a tough guy but Mr. Miyagi plays his background cool... even though he earned the Medal of Honor in World War II from his work in the 442nd Regimental Combat Team, not to mention the Purple Heart and at least 7 other awards! He learned his karate skills from a fisherman father and is content to be a janitor at an apartment complex... but this simple man know how to truly kick butt when the moment calls for it!

Show the world that simple actions and appearances can hide true mastery when you wear this officially licensed Mr. Miyagi costume kit from The Karate Kid. If you've noticed a pattern, so far, it holds true here. Our in-house design team worked to create a movie replica look based on your favorite sensei. It includes a tank-style undershirt and a button-up overshirt. The lotus headband will ensure everyone knows who you are... though the included chopsticks will help you both enjoy a snack and play out your favorite scene!

Alright, maybe 'strike hard, strike first, no mercy' doesn't actually make for a particularly complex setup, now that we think of it. There is something to be said about being cool-headed, not to mention comfortable, whether you're taking down the Cobra Kai or just enjoying some dinner with your Daniel-san!