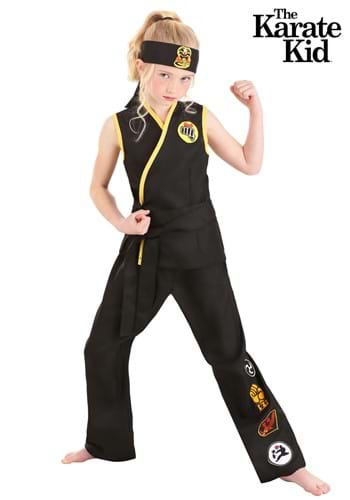 Break Into a New Role

So your kiddo wants to try their hand (and feet) out at karate. Perhaps they grew up on the stories of Daniel-san and that epic Crane Kick. They might have seen the struggle that the baddie, Johnny, faced and wondered what happened next! Of course, it has been a few decades. Maybe they're all about the new karate capers of Cobra Kai. No matter what their reasons, they've got some big decisions to make.

What dojo will they join? Of course, Miyagi Do is there to teach the inner calm and discipline to hold back on your skills unless they're needed. There are rumors of the Eagle Fang that blends those tactics with just a hint of ruthlessness. But we have to note that your average eagle isn't flying around with a sharp tooth, so the name can leave a kiddo confused. So, maybe—just maybe!—your child can be the one to knock some sense into the Cobra Kai dojo!

No matter the ambitions of your young master, this Cobra Kai costume for girls is sure to earn you some points. This is a Made By Us design that brings all the fandom of the Karate Kid franchise and combines it with a modern edge. This karate costume includes a black and yellow tunic with the Cobra Kai logo on the chest and a striking snake in the back. The matching pants have a ton of victory patches on each leg and you'll cinch the look together with the iconic black belt. Keep in fighting form with the Cobra Kai headband and your kiddo will have their ruthless edge.

Whether your girl believes in the crushing motto of the Cobra Kai or seeks to change them from within, this officially licensed Cobra Kai costume is the first step in claiming victory.