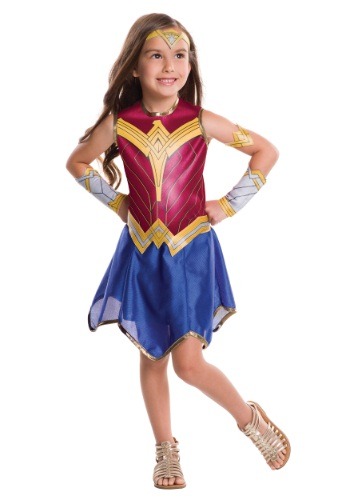 He cannot be killed...he is from my world. - Superman

Finally! Wonder Woman makes her big screen debut. It has been much awaited by us, and well most of the DC fan base. As well as feminists, and little girls everywhere. Now there is a super hero with real super powers that they can relate to.

And your daughter is no different. Sure she liked Black Widow in the Avengers. But Black Widow doesn’t have super powers. She doesn’t have a sword, or bracelets that can block bullets. She isn't part of a society of women who live for extremely long periods of time. And let's be honest Diana Prince's super hero suit is way cooler looking than Natasha Rominov's.

So let your daughter channel her inner super hero with this Child's Dawn of Justice Wonder Woman Costume. She will be so happy that she gets to kick some bad guy butt, and not just be the princess waiting for a prince to save her. Because Wonder Woman is a super hero she can relate to. Don't forget to get her a Lasso of Truth, and sword to complete the look. Your little girl will be glad she can do battle with aliens from Krypton, and try to keep Superman, and Batman from fighting. And when Superman tells her she "can't" do something, she can respond like Diana Prince did. "I HAVE killed beings from other worlds."