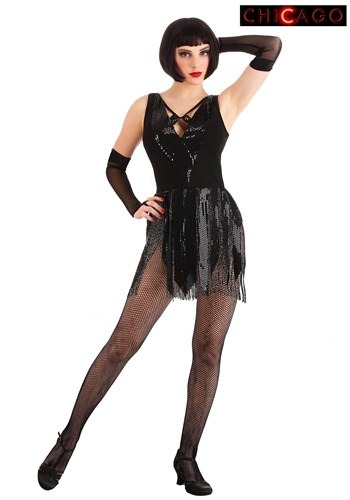 And All That Jazz

When it comes to shimmying the night away, there's no one that's as infamous as Miss Velma Kelly. She's got it all.. the looks, the moves, she's even got a wild, tragic back story! And until that not-so-innocent Roxie Hart was arrested. First, she took Velma's publicity, then she stole her lawyer, she even had the audacity to steal Velma's garter. The gall! But anyone who's seen Chicago knows that Velma will always end up on top. She has those street smarts that are not only enough to let her get away with murder but profit from it as well. Well, she says she didn't do it. But if she had done it, she would still be the most stylish guilty woman on the cell block!

This shimmy-ready ensemble has all the drama a jazzy character could hope for. The skirt is made up of metallic fringe and strips of fabric with dazzling sequins. The bodice is also sequined around the neckline while the back has sheer panels to create a seductive look that's Velma Kelly approved! The bodysuit under the dress keeps you covered as you shimmy and kick your way to stardom. Sheer arm warmers top off the ensemble to complete your fabulous look.

If you're a fan of the jazzy stylings of the merry murderesses of Chicago, then you probably know the importance of the little details that make this dress a theatrical ensemble. This gorgeous costume can be completed with a pair of tight-knit fishnets, a sleek black bob, and an extravagant attitude. And if you simply cannot do it alone, pair up with Roxy Hart and you'll have an act that'll sell seats like hot cakes... or a winning Halloween costume, it's up to you!