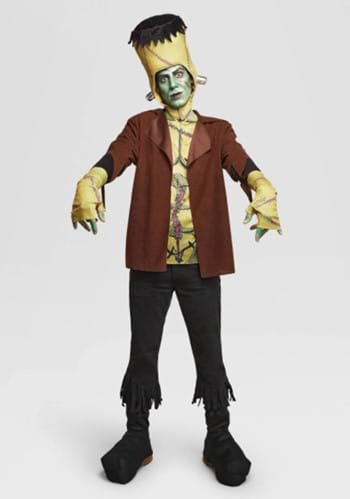 The underground laboratory shakes. The storm raging above produces an enormous bolt of lightning that races down the conduit and into the undead limbs of the motionless monster. Suddenly, he twitches and moans! "It's alive!" cries the mad scientist gleefully. "Igor, my creation is alive!" The monster sits up groggily, blinks once or twice, and sighs. "Ugh, Mondays," he says. "Can't function without my coffee. Need to hit Starbucks and post to the 'Gram before I can start my day." The scientist and his lab assistant look at each other. "Igor...he's speaking a different language than us," says the scientist. "What is happening?" "Master," says his assistant tentatively, "Electric power can come from any era, not just ours, and it influences the brain. The monster is alive, but he thinks he's living in a different century!"

No matter what era you're in, this Lab Monster Adult Costume is a classic choice for Halloween! A brown short-sleeved jacket hangs open to show the greenish shirt bearing the hideous signs of a body stitched together from corpse parts. The fingerless gloves are also decorated with bloody suture graphics. The clunky black boot covers will look perfect with whatever pants you can pilfer. The hood fastens under the chin with a hole for your face (your real, non-corpse face, hopefully) and is embellished with fake bolts at the neck and a mat of black hair on top!

Igor and his master watch as their monster does lunges around the laboratory, talking about "hashtag fitness goals." "Igor," sighs the scientist, "I'm not sure why this happened, but it looks like we're going to need to buy our creation a stationary bike."