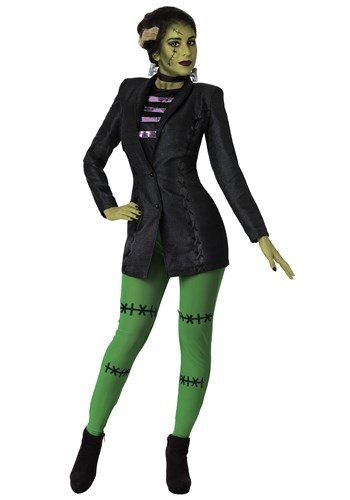 You know, Victor Frankenstein kind of botched his first attempt at making a monster. Let's take a quick look at some of his choices. First, he made the monster 10 feet tall and gave him super strength. Next, he made him ugly as a mug, guaranteeing most people would be afraid of him at first glance. Then, he decided not to teach him any human language.

That's basically the equation for a disaster, because now the monster can cause terror and destruction across the land, and no one can stop him because he's super strong. No one can calm him down because the monster doesn't understand the language. Had he made his monster a little bit cuter and less intimidating, maybe he would have had a little more success with his little science experiment.

Well, we're not going to make those same mistakes! Our vision of a mad scientist's monster is a bit more approachable and much less murderous! In fact, you can become the monster if you like. All you need is this women's Frankenstein costume.

This women's costume comes with a black blazer that buttons in the front. The sides of the blazer have stitching along the sides to make it look like a patchwork coat, perfect for a fashionable monster! The black shirt has purple sequined stripes in the front. The tights are a bright monstery green color with appliqued stitch patterns around the legs to continue the patchwork theme.

The finishing piece to this outfit is the choker, which has silver neck bolts attached to the sides to make you look like Frankenstein's Monster... but much cuter!

You can make this costume look alive by putting some green makeup on your face and practicing your monster voice. Oh, and please don't go chase down Victor in a fit of revenge! After all, we don't want a repeat of the last monster incident!