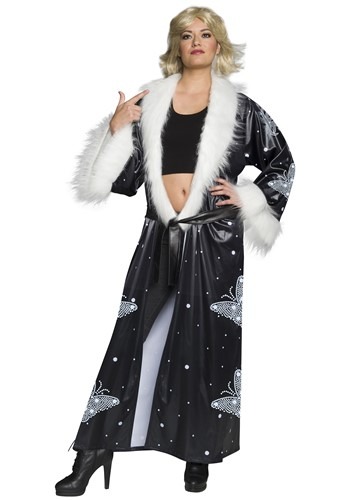 Ashley Elizabeth Fliehr is better known as the dynamic and record-holding wrestler Charlotte Flair. That's right, she's the daughter of WWE Legend Ric Flair, but she has forged her own path as the only Divas Champion ever, as well as winning several other Smackdowns, NXT Women's Titles, and more. As the daughter of the Nature Boy, however, it's only fitting that she include Nature Girl in her long, and continuing, legacy in WWE stardom. Now, you can add some Charlotte Flair swagger to your Halloween look. Channel your inner Diva in this WWE Women's Nature Girl Costume!

This costume seeks to blend the legacies of Charlotte Flair and Ric Flair. Both have worn some truly spectacular robes in their storied careers. This costume robe is not actually based on any of Charlotte's robes, but on one of Ric's! Ric Flair wore this butterfly-adorned black robe for the 1992 Royal Rumble, as well as on several other occasions. The white, stylized butterflies on the deep black robe are striking, as is the white fur lining on the sleeves and torso pieces. Pair it with a black crop top and leggings, like the model here, or with something more your style. Ric once wore this with red shoes, so any kind of shoe is permissible, too!

"To Be the Man, You Gotta Beat the Man"

Powerful words, Ric. But you could also just be a powerful lady like Charlotte and crush anybody in your path! Time and time again in her career, Charlotte Flair has risen to the top and been declared the victor. In this stunning costume, you too can be declared a winner—specifically, a winner of Halloween and all of its costume choices. So continue the legacy of awesomeness and strut your stuff, girl! Wooooo!