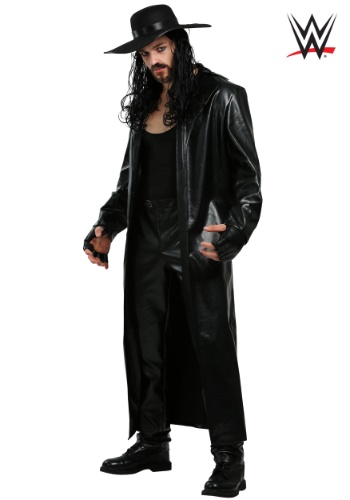 Undertaking 101: Wear black. Wear a wide brimmed hat if you've got it too, obviously, also in black. A long black trenchcoat helps too, and since you never know exactly what you might be facing in your day as a funeral director, well, come to think of it... just go ahead a wear a wrestling singlet too. And if you want to wear black leather pants over it, that's fine with us!

Ok, we kid, since funeral directors and morticians don't really wear all black. And they probably don't wear a trenchcoat too often either. And they definitely, definitely don't go about giving tombstone piledrivers to their brothers. Well, unless you're the Undertaker. Because, then, that's exactly what would be in order!

Yes, we're talking about The Undertaker, of WWE fame, and if you've ever a had a thought about becoming the Big Evil, well, here's your chance. With this Plus Size WWE Undertaker Costume! Officially licensed, we teamed up with the WWE to bring his classic ring attire into the costume world, and with this ensemble you'll be ready to fill the shoes of the all time wrestling legend.

With a vinyl faux leather overcoat and matching pants, along with a stretch polyester tank top to mimic his wrestling look, you'll have a real deal style that's ready for the ring! The ensemble also includes the signature hat and fingerless gloves for the head to toe look. Team up with your best bud in our Kane Costume, and you'll be ready to rule the WWE. Just be careful if you try to tombstone him!