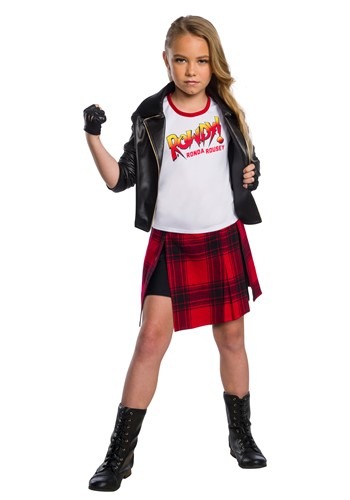 Rowdy for a Reason

There's a reason that Ronda Rousey inherited Roddy Piper's "Rowdy" title. She had plenty of naysayers during rise to the top. They said she didn't have what it takes to earn the belt! But she showed them just how wrong they were! During her first year in the WWE, she reigned as the champion for 232 days. She had a TON of challengers, but she pummeled the competition with her expert judo skills and her fierce attitude. She let the world wrestling world know loud and clear, that she could scrap her way through anything!

Is your girl as tough as Ronda? Does she never back down from a fight, no matter what? Is she ready to show her stuff in the ring? Well, then it's time for your girl to take on the title of "Rowdy" with this WWE Rowdy Ronda Rousey Deluxe Costume for kids.

This officially licensed costume is based on Ronda's signature outfit! It comes with the white top, which has "Rowdy! Ronda Rousey" printed on the front, which is an homage to wrestling legend, Rowdy Roddy Piper. The red kilt has a plaid pattern and complements the shirt with a look that's definitely ring-ready. The black boy shorts fit underneath the kilt. The black jacket is made out of a faux leather material and provides a rebellious and, dare we say it, rowdy look, perfect for your young wrestler in training. The finishing touch to this deluxe outfit is the gloves. The fingerless gloves will have your girl feeling as tough as Ronda!

If your girl wants to step into the ring, then she's going to need a look as tough as her attitude! This Ronda Rousey WWE costume will have her ready to claim that championship title like the real Ronda Rousey!