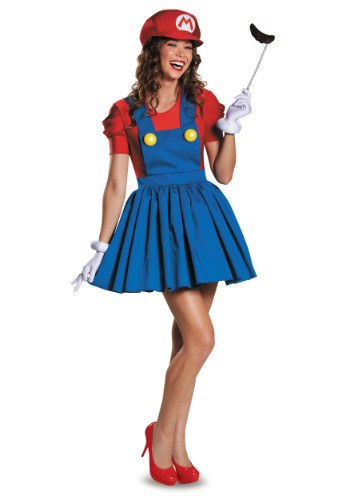 The Mushroom Kingdom is a pretty awesome place, but you always have to keep an eye out for danger. Sure, the world is bright, colorful, and looks so cheerful that even the clouds are smiling. But there might very well be some jerk hiding in that cloud waiting to throw a spiky ball at you! So what's a girl to wear in such an exciting place? This Mario Skirt Costume will get you ready for whatever you run into!

You're probably wondering what you have to do to get this fun and flirty Mario look. Do you have to scour a secret level to find the right magic mushroom or power-up? Or jump into some warp pipes in a certain order, which then leads you to a treasure chest with a costume in it? Or maybe it's just a special code you have to enter with a controller to unlock it (if only life were that easy...), but luckily it's nowhere near that complicated. Just slip on the cute dress, say “It'za me, Mario!”, and you'll look like you jumped right out of a video game! Actually, saying the catchphrase is optional, but it's too much fun to pass up.

Since bulky overalls, like the ones Mario is always sporting, aren't much fun to party in, this costume puts on a feminine spin on the look. The delightful skirt and blouse keep the red and blue colors and the big buttons in front, while the character's signature bushy mustache on a stick makes a fun fashion accessory. Go out on your own as the sassy hero, or with a friend in a Luigi costume, because costumes are always more fun with two players!