Women's Wind Me Up Dolly Costume 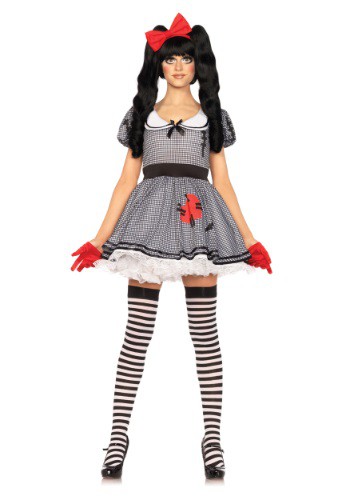 It is time to admit something… embarrassing. We tackle some of the most terrifying creatures in the thirty-seven known universes and periodically handle beasties that show up from ones that we haven’t even heard of. We’re pretty awesome here in the office, if we dare say so ourselves. But, there are some things that give everyone the heebie-geebies. We’re talking about things that pretty much make us pee our pants. (Just remember we fight demons, okay?) Yeah… Dolls. Let’s face it: they look at you. They see you. They watch. They stare and make your spine tingle and crawl its way up itself. Haunted, creepy, terrifying dolls.

Every so often, the dolls start to react to each other. They move and look, occasionally glare. We would have thought that they’d enjoy each other’s company, but they do not work that way. Perhaps there is some competition between them… some sort of assertions on which is better dressed, as the better craftsmanship. We’re never quite sure. But, once they start moving around, walking, idley threatening to arm themselves… we tend to avoid them as much as possible.

So, long story short… they escaped. We here there are a few in your area and thought you should be on the look out and, ideally, disguise yourself so you aren’t one of their targets. We recommend the Women’s Wind Me Up Dolly costume. But, trust us, it isn’t as innocent as it sounds! This V-neck gingham print dress fastens with Hook and Loop fastener and has a silver key in the back and a printed broken heart on the front. The skirt has a lovely lace-edge petticoat and the look is completed with a bright red bow headband. Gather up some accessories to bolster the look. Be warned, however: these doll costumes have a haunted tendency and you might end up really freaking people out! Of course, if that’s your ambition, great choice! (Just stay away from us!)