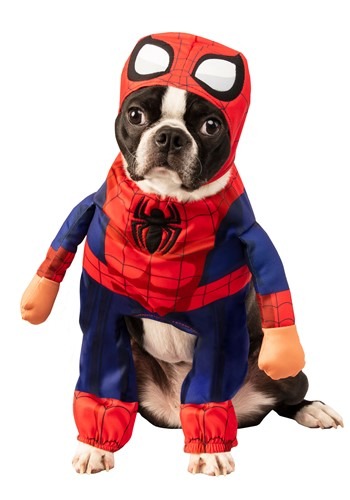 Time For an Upgrade

Who could have expected to get that call? Invited to join some mysterious internship at Stark Industries? Sure, a ton of folks get called in for those kinds of opportunities. (It is a multinational company and the largest technology conglomerate that the world has ever seen, after all.) But, since when did they start hiring dogs?

You're going to learn eventually, so we might as well let you in on the details. Your pupper is quite the hero! There's apparently a video some place of that rascal snatching Captain America's shield and going on quite the fun run with it. (Boy, did the Cap get mad!) But, it's time to get professional. Naturally, that means it is time to suit up!

Bring your pet from mere Stark intern to full Avenger hero with this Spider-Man pet costume. This is a step-in costume that has stuffed arms and a hook and loop hood that will give your pet's front half the look of Spider-Man rushing into the fight. (No web slingers included!)

No need to fear anything when you've got your friendly Spider-Dog on the mission. The only thing you'll need to worry about now is that animal of yours climbing on the walls and snatching extra snacks!