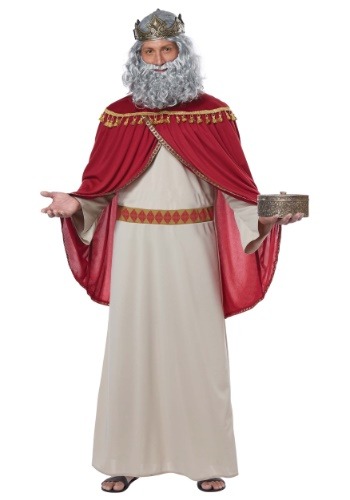 It seems like names from the Bible are pretty common as first names over the last few thousand years, but we’ve had this burning question just eating into our thoughts. How come Melchior never caught on as a popular name for boys? Just think about it for a second. Mark, Matthew, Luke, John are everywhere. You can go just about anywhere and bump into a Paul. You probably know at least one Adam. Why, we’ve even met a Samson, but never a Melchior.

It’s really too bad. The well-known Wiseman was a king who saw the Star of Bethlehem shining high in the sky and then decided to hoof it there, just so he could give baby Jesus some gold (this costume version has him holding some frankincense) for his birthday. That seems like a pretty rad gift for the newborn Jesus! Jesus is still the most meaningful figure of the story, but we still think that Melchior seems like a pretty nice guy and deserves at least a thumbs up at least a few people who take on his name!

Now, you can help retell the story of Bethlehem and carry on the name of famous magus from the tale! Just dress up in this men’s Melchior Wise Man costume and you can be an important part of the next Christmas pageant. The costume comes with a cream-colored robe with a red cape. Finally, it comes with a gold-colored crown to give you the look of a true biblical Wiseman.

When you wear this costume, you can proudly proclaim that you’re playing the role of Melchior (maybe Mel, for short), the totally awesome guy who brought Jesus some gold! Pair this up with our Gaspar and Balthasar to bring together the 3 kings who traveled far and wide to bring gifts! It’s a crucial part of the Christmas story, so you’ll want to have all of them there for the play.