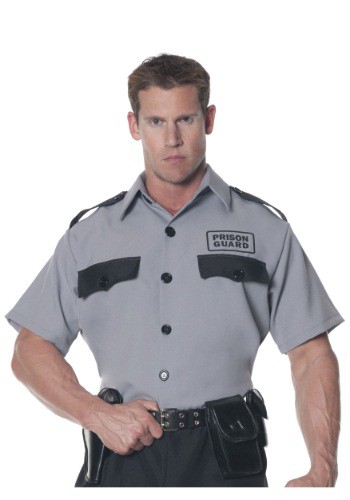 Maybe outside the walls of the Big House, you're just a Regular Joe. But inside... that's another story. While romping around the jailhouse, you're known for a particular set of skills that are rather surprising. Maybe it is your dance moves that keep the staff and inmates amped up. Perhaps it is the extra hours that you throw in to keep the library stocked and the lessons you've taught inside its walls. Sure, "The Best Halloween Movies of the '80s" isn't really a standard collegiate course, but that doesn't mean that it doesn't contain some seriously important intel! All we know is that we appreciate the efforts you make to keep the system functional with an emphasis on the fun part. For that, we've put together this look that is a bit comfier (and flattering) compared to your usual Warden attire.

Made to look just like the uniform of a jailhouse guard or prison CO, this Made by Us Prison Guard Shirt perfectly captures the unmistakable look of authority. It's made in the stern button-down style preferred by lawmen everywhere, has a classic wing collar, and dark epaulets with matching pocket flaps. And just in case anyone isn't completely clear on who they're dealing with, a "prison guard" logo on the left breast ought to make it pretty obvious.

Of course, this awesome Men's Prison Guard Shirt also makes a great Halloween costume for civilians who want a taste of the prison life... without having to try on orange duds. Of course, if you have any friends on the other side of the law who want to play dress-up with you, we sell orange inmate costumes, too!