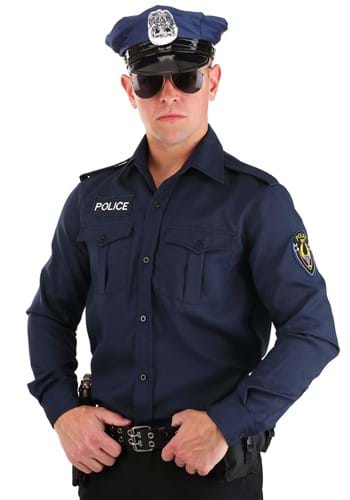 Any costume party can get out of hand. That goes double if you’re trying to hold the event at your home!

One second everything is calm and composed. The next second, Gina is trying to double dip her chip into the salsa. Dale and Terry are arguing about who has the better costume. Debbie is trying to put her drink on the coffee table without using a coaster and Eddie is tracking mud into the house with his dirty boots. The whole party could use a dedicated Party Police officer to make sure that everyone follows the rules!

You have to kindly remind Gina to follow the social rules of dipping (one dip per chip, Gina). Then, you have to mediate the argument between Dale and Terry, assuring both of them that they are wearing totally awesome costumes. Next up, you need to give Debbie a verbal warning for not using a coaster on your good furniture. Lastly, you need to tell Eddie to take off his boots before heading into the living room. If only you had the perfect uniform to showcase your new role as the police of the party…

Introducing this simple Police Officer shirt! The costume shirt is a classic button-up style shirt in a navy blue color. It has a “police” patch on the front, along with a couple of chest pockets. The shoulder has a police patch embroidered onto the side for added detail. Just pair this shirt up with a pair of your best black pants and some sunglasses to give yourself a polished police officer look.

When you head to the next costume party, everyone will know that you’re there to keep the peace! It’s a great look for anyone who has a strong appreciation for following the rules!