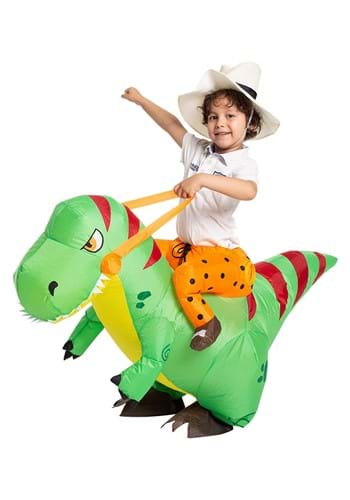 For many years, your child was like a wild little T-rex, in need of taming. They opened every cabinet in your house, rearranged everything in your drawers, drew on walls and floors, broke vases and dishes, and stomped on your flower beds. But they are finally a big kid and now they like to help! They sweep the kitchen, fold laundry, and water the garden with you.

It sounds like your kiddo is ready for a rex of their own. With this Kid's Inflatable Ride-On T-Rex Costume, they can take the reins on a dinosaur. It'll be a blast to watch their imagination come to life as they pretend to ride it all over the neighborhood, trick or treating. And it's a nice reward for them after finally learning to rein it in a bit, themselves! They will have so much fun playing in this costume, you may want to add it to their dress-up bin long after Halloween is past.

This costume is so easy to wear, it's deceptive. It's actually inflatable pants that can be worn with your tot's favorite top. Your child's feet will step into the T-rex's back legs, while the human legs on the top are inflatable decoys. The whole thing runs with the help of a built-in battery pack and a fan, so it can last all Halloween eve!

Of course, there is an oh-so-slight chance that this plan could backfire, and teaching your child to ride a T-rex will send them on a power high. But that's almost never happened. Almost. We are sure this is a foolproof plan and that you'll be thrilled with this costume, not to mention seeing your child in it.