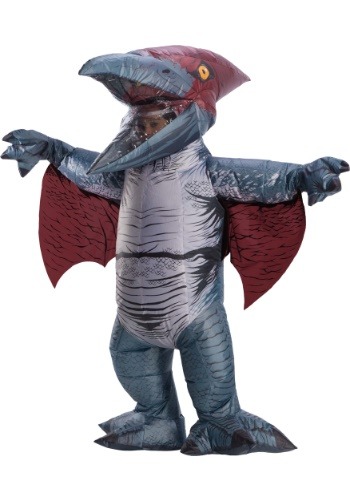 It happened. A giant meteor hit and now the once thriving earth is turning into an arctic tundra, incapable of sustaining life. Actually, nevermind, that's not what happened. A massive volcano erupted, covering the entire planet in boiling-hot magma and skin-scorching lava, destroying the dinosaur's kingdom and ending their reign for good. Wait, wait, actually, we're wrong again. A volcano didn't erupt, instead, aliens invaded earth and propelled dinos into extinction using their alien blasters and laser guns. Hold on, there's a large possibility we're wrong about that too...

To be completely honest, we don't have an answer for why the dinosaurs died out and neither does anyone else. Although we can certainly say that the larger-than-life reptiles were mind-blowing awesome and magnificent beasts we wish we could have seen for ourselves. If dinosaurs interest you and you want the chance to step inside their super-sized dino feet, the inflatable adult Pteranodon is a prime choice. No, it doesn't give you flying capabilities but you will look pretty fly in general!

Officially licensed from the Jurassic World 2 movie, the inflatable costume allows grown-ups to resurrect a fossilized species. Once the internal switch is turned on, a mini fan blows the adult Pteranodon costume up, revealing a healthy wingspan, fierce claws, and an open beak-like mouth. The clear panel in the mouth allows wearers to see out so you don't trample over people. The gray, blue, maroon color scheme creates the perfect color scheme for a flying dinosaur.

Although dinosaurs are archaic fossils (literally,) inflatable costumes are fairly new and all the rage for Halloween which is why we have an assortment of inflatable Jurassic World costumes. Get your friends in on the prehistoric pleasantries by picking up the inflatable triceratops and velociraptor costumes too!