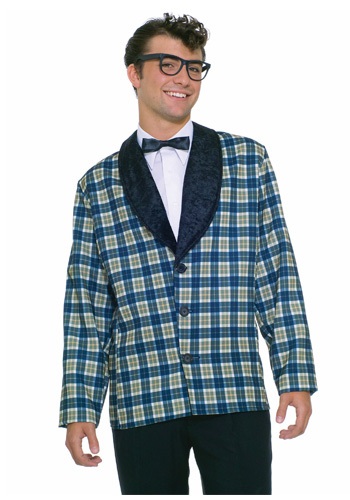 There's two things we love most about this costume: First, it reminds of us of the late Buddy Holly, who wrote and performed arguably some of the greatest songs of the '50s, if not of all time. "Everyday"? Still totally holds up! You were also probably raised by wolves if you haven't heard someone sing "That'll Be The Day" in response to some outlandish declarative statement.

Second, thinking of Buddy Holly also makes us think of his songs "Peggy Sue" and "Peggy Sue Got Married (that Peggy Sue must've really knocked Buddy Holly for a loop, to have inspired not one, but two songs about her) which also reminds of the movie Peggy Sue Got Married, which was directed by Francis Ford Coppola and stars a young Kathleen Turner, Nicolas Cage, AND Jim Carrey. It's about time travel from the '80s back to 1960 (it's basically the mid-life crisis version of "Back To The Future") and it's freaking fantastic.

So if Buddy Holly is amazing and "Peggy Sue Got Married" is amazing, then obviously this costume, by association, is also amazing! So gab your Fender guitar, a couple of pals, and start serenading your church (maybe you could name your band The Rhythm Methodists?) and local sock hops in this geek-chic Fifties Good Buddy Costume. One look at this long-sleeved blue and green plaid polyester jacket and black tie ensemble and there'll be no doubt that it's hip to be square! Add some black pants, black frame glasses, and gel up your hair, and you'll be ready to be-bop your way into the hearts of screaming, crying girls everywhere (but in a good way).