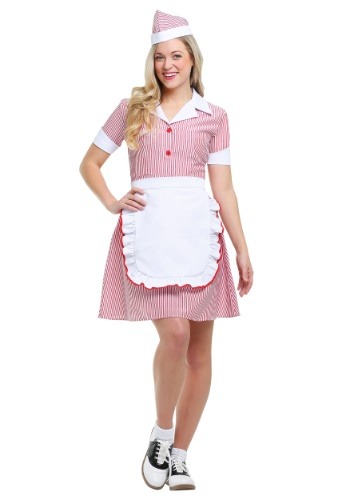 People have a nostalgia for the fifties, that much is certain. There's the question of why. We could say it's the fashion: full skirts, peter pan collars, and red lips. It would be understandable for anyone to be nostalgic about those smashing ensembles. But, no we don't think it's only the fashion. Maybe it's the music, all bubble gum pop and hip rocking swarthiness that would be understandable too.

So, we're pretty sure we're on something. What do people picture when they think of the fifties? That's right, a diner with people sipping on shakes and Cokes and eating juicy burgers and French fries. Those diners with their red vinyl booths and chrome exteriors reeled in the imaginations of generations to come. So, people came to these picturesque places in shining cars with dramatic giant hoods and sculpted wings on the trunk. In their red leather interiors, people would pull up and order these classic foods from the friendly carhop, listening to Elvis playing over the loud speaker.

If you want to be part of the most nostalgic part of the fifties than you just might want to dress as the classic car hop. These servers in red and white striped dresses and white starched aprons, cuffs, and collars brought trays of happiness to the people waiting in cars. Top it all off with the jaunty cap and you're ready to bound down memory lane, maraschino cherry in hand.