Elf on the Shelf Adult Costume 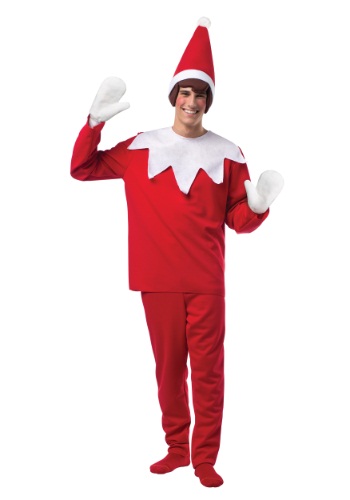 Green Munchkin Elf Shoe Covers for Adults
$24.99
Size: ST
Add
Product Information
Items Included
Features
Become a scout for Santa in this Elf on the Shelf Adult Costume! Watch over everyone and report on who's naughty and who's nice. Start a whole new Christmas tradition.

Who is Santa's covert spy? Well, it's hard to tell. At one point Santa did all his own spying on kids to make sure if they were naughty-or-nice, but he is far too busy for that. So, he deployed from the north pole a specific elf too make sure the kids are behaving.

The elf mainly sits on the self and surveys the behavior around him. Santa's helper does much more than just convey information to Mr. Claus. He told a group of seasoned reporters during a press conference, he even had to suppress a coup. The cat and dog of the house where planning on taking over Christmas dinner and knocking of the tree. During the evening as the cat climbed the tree the elf chased it down. Then that elf guarded the fridge and food from any further attacks. The humans of the house were non-the wiser. They woke up to see the elf sitting on the kitchen table and smiling. The dog and cat made Santa's naughty list, and the elf was never fully recognized for all his hard work. However, he is forever greatly loved.

So, we may have made up all the stuff about the pet Christmas takeover. You can be just like the ever watchful elf in the officially licensed Elf on the Shelf Adult Costume. The fleece pullover and pants are cozy just like a cuddly elf should be. Get ready to see who is naughty or nice as the Elf on the Shelf!