Elf on the Shelf Costume for Women 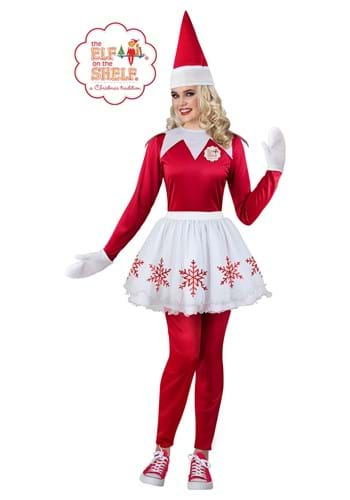 You Better Watch Out

Are you known to leave your dirty clothes on the floor instead of placing them neatly in the laundry hamper? Are you guilty of using the last of the toilet paper and forgetting to set out a fresh roll? Do you drink the last drop of milk in the jug and put the jug back in the fridge? Watch out! This holiday season, there's a new sheriff in town - so to speak - and she means business. Just like her jolly boss, she knows when you're sleeping, she knows when you're awake, and she knows when you've been bad or good, and she sees everything thanks to her lightning-fast moves! It's ok, though, because she loves to reward good boys and girls and makes sure that Santa knows they deserve some extra presents!

Be Santa's little helper this year in this officially licensed Elf on the Shelf Costume for Women! No one has more holiday spirit than you when you wear this gorgeous red jumpsuit with its white elf collar and mitts. A sweetly poufed skirt has a festive ring of red snowflakes near the hem. Add the pointed red elf hat with its band of white trim and start your journey from the North Pole.

Fastest Elf in the West

Now, other than rewarding good behavior, this elf is particularly well-known for being quicker than a blink! Try as you might, you'll never catch her as she darts from place to place in your house. It's almost as though she was a holiday ninja. Hmm...that has a catchy ring to it, too!