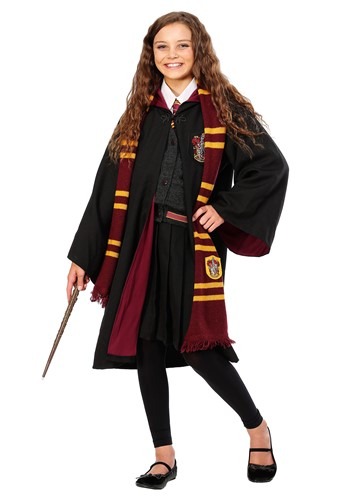 What would Harry and Ron even do without Hermione? Harry might be the brave chosen one and Ron might have a spot of goofy charm, but they couldn’t cook up a proper plan between the two of them if they tried! That’s why they need Hermione. She’s the brains of their little trio and without her, Harry never would’ve survived long enough to make it to the final battle against Voldemort and his legion of loyal Death Eaters. Yes, she’s a true hero in the wizarding world and if your child has the wit and skill of Hermione, then she might just be ready to cosplay as the one and only wizard from the world of Harry Potter.

Now your child can become the Hogwarts prodigy from the books and films with this deluxe Hermione costume. The official costume recreates her Gryffindor robes from the movies and it comes with everything your girl will need for her first year at Hogwarts. It comes with a sweater, a shirt front, and skirt and tie. Of course, no young witch or wizard would be caught dead without their robes, so this one comes with a robe for your child to wear to class. Even if your child is just a muggle, it’s enough to make them feel like quite the formidable spell caster!

A Match for Voldemort

Now, once your child has this costume on, she’ll be ready to head to Hogwarts. You might want to help her learn a few spells to catch her up to speed with the rest of the young wizards that are going to be attending Hogwarts this year! And make sure that you outfit her with a wand, because she's going to need one if she plans on facing off against Voldemort alongside Harry Potter!